Prosecutors will not oppose attempt by former Belfast sub-postmaster to overturn conviction for historic fraud-related offences, the court told 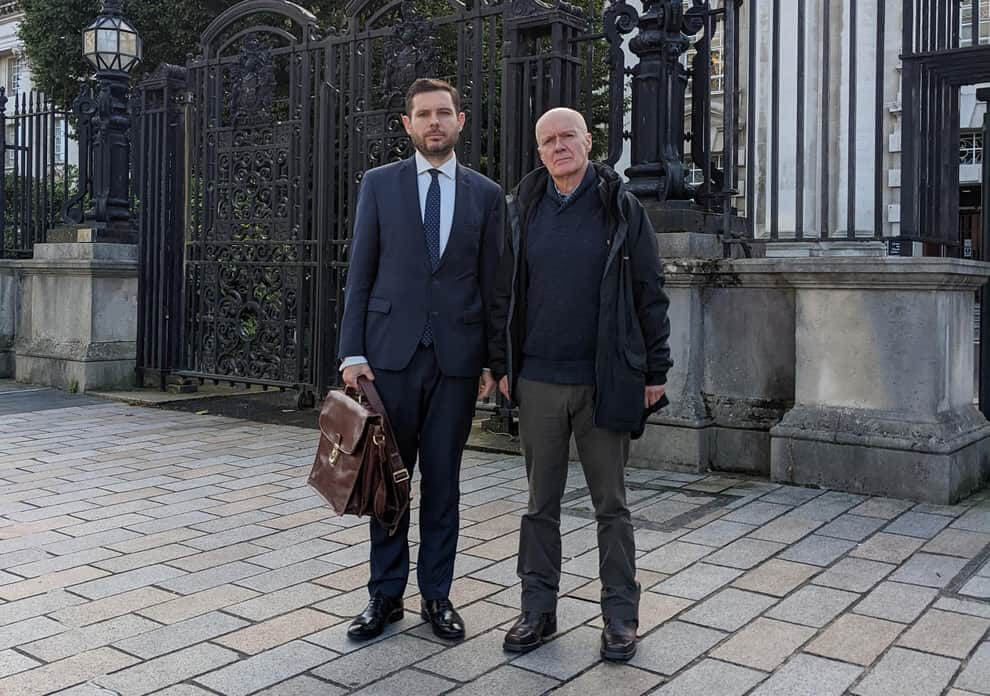 Pictured outside the Court of Appeal today – Alan McLaughlin on the right, alongside his solicitor Michael Madden.

Prosecutors will not oppose appeal by former sub-postmaster represented by Madden & Finucane.

Prosecutors are not opposing an attempt by a former Belfast sub-postmaster to overturn a conviction for historic fraud-related offences, the Court of Appeal heard today.

Senior judges agreed to fast-track Alan McLaughlin’s legal bid to clear his name after being told how his life “fell apart”.

A similar appeal is being mounted by a second Northern Irish man, Lee Williamson.

Both challenges are centred on a defective Post Office accounting system.

The Horizon IT scandal has already led to scores of branch managers in Britain who were wrongly found guilty of offences having their convictions overturned.

Between 2000 and 2014, the Post Office prosecuted more than 700 sub-postmasters and sub-postmistresses because information from the Horizon system made it look as though money was missing from their sites.

It has been described as the most widespread miscarriage of justice in UK history.

Lawyers for Mr McLaughlin and Mr Williamson contend that the same faulty accounting software was central to the charges against them.

In February 2005 Mr McLaughlin was convicted of false accounting while in charge of a Post Office at Tennent Street in Belfast.

He had denied the allegations during interviews and commissioned an expert accountant’s report in support of his defence.

Mr Williamson was convicted of fraud by false representation and abuse of a public office offences in November 2014.

It was alleged that he had stolen and falsified accounting records in his role running a Post Office in Portstewart, Co Derry.

The two men’s legal representatives claim their convictions are unsafe because Horizon was essential to the prosecutions.

In court today counsel for the Public Prosecution Service, Philip Henry, disclosed that it “does not oppose” Mr McLaughlin’s appeal.

Defence barrister Tim Moloney KC sought an early hearing date to clear the way for his client to participate and give evidence at a public inquiry in London into the Horizon failings.

A potential compensation process could also be advanced if the convictions are formally quashed.

The court was told Oxford-educated Mr McLaughlin worked as a schoolteacher before the devastating consequences of the criminal charges.

“He used his redundancy payment to buy into the Post Office, and at that point his life fell apart,” Mr Moloney said.

However, with the PPS continuing to oppose Mr Williamson’s appeal, his case was listed for January.

Later, a solicitor representing both men welcomed the confirmation that prosecutors are not resisting Mr McLaughlin’s attempt to clear his name.

Michael Madden of Madden & Finucane law firm added: “The decision to quash the convictions is a matter for the court and we are grateful that the court has agreed to expedite the case for hearing.

“We look forward to preparing for Alan McLaughlin’s hearing (this month) and Lee Williamson’s hearing in January.”