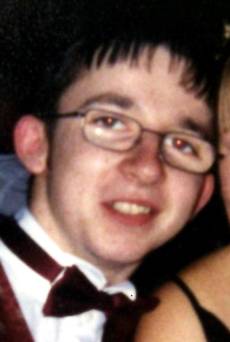 Danny McColgan was murdered by the UFF in 2002

THE father of a Catholic postman murdered by loyalist paramilitaries has cleared the first stage in a legal action over alleged delays in holding the inquest.

Samuel McColgan was granted leave to seek a judicial review amid claims of a human rights breach in the time taken to examine the killing of his son Daniel 15 years ago.

His lawyers argue that the case was plagued by inexcusable delay that requires an award of damages.

Daniel McCoglan was gunned down by the Ulster Freedom Fighters as he arrived for work at a sorting office on the outskirts of Belfast in January 2002.

In October 2015 a coroner found the shooting had been a completely sectarian attack on a 20-year-victim deliberately targeted because of his religion.

But the murdered man’s father claims the 13-year period between the killing and conclusion of the tribunal represents an unlawful delay.

High Court proceedings alleging a breach of human rights have been brought against the coroner, the Chief Constable and the Department of Justice.

No one has ever been convicted for the murder carried out at the depot in Rathcoole, Newtownabbey – a predominantly loyalist area.

A CCTV camera positioned at the entrance gate to the sorting office was inoperative at the time of the attack.

According to the coroner the equipment had the potential to capture and record at least some of the events around the shooting.

He identified a gross failure to ensure the camera was functioning as intended.

Following his findings Mr McColgan instructed his legal team to challenge the length of time it took to hold an inquest into his son’s killing.

They allege the state failed to ensure a prompt investigation in line with obligations under European and domestic law.

Part of the case also centres the period taken by police to provide disclosure.

Lawyers for the victim’s father are seeking a declaration that the delay was incompatible with his rights under Article 2 of the European Convention on Human Rights.

Following submissions Mr Justice Maguire ruled that the challenge should proceed to a full hearing.

Outside court the family’s solicitor, Fearghal Shiels of Madden and Finucane, said the inquest had been “dogged by inexcusable delays” on the part of a number of public authorities.

“The Chief Constable of the PSNI did not provide disclosure until nine years after Daniel’s murder and in excess of 20 preliminary hearings were required before the inquest was ready to be listed for hearing.

“We contend that it is appropriate that this outrageous delay is reflected in an award of damages.”