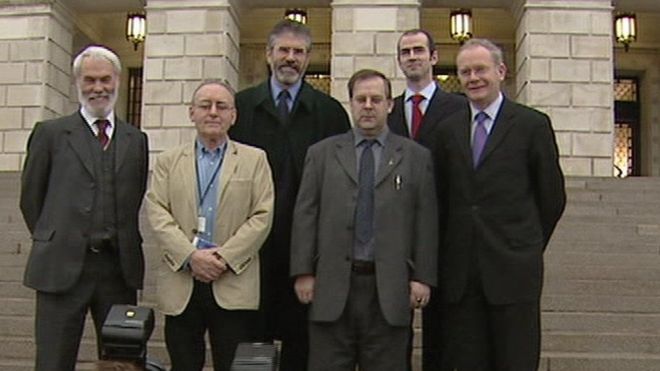 The family of murdered Sinn Féin official Denis Donaldson have said they do not believe the Provisional IRA killed him, or that his shooting was authorised by Gerry Adams.

The allegations were made in a BBC Spotlight programme on Tuesday.

Mr Adams has denied any involvement in the murder of Mr Donaldson in 2006.

In a statement, BBC Spotlight said: “The Spotlight programme dealt with matters of great public interest and the BBC stands by its journalism.”

A lawyer for the Donaldson family spoke to the BBC on Friday after meeting Garda Deputy Assistant Commissioner Derek Byrne and two other senior police officers.

Ciaran Shiels said the officers provided an update on progress in their investigation during the meeting in Belfast.

“The one theme that has come out of today’s meeting is that the theory that was being advanced by BBC Spotlight earlier this week, that this was in some way carried out by the Provisional IRA or authorised by Gerry Adams, I think it’s absolute nonsense,” he said.

Asked how the family responded to the claims that Mr Donaldson was killed by the Provisional IRA, and that the killing had been sanctioned by the Sinn Féin leader, Mr Shiels said: “It just does not stand up.

“It does not marry in any way with the lines of inquiry that have been progressed by the guards (Garda) or by the the (police) ombudsman.”

Mr Donaldson was shot dead in a remote cottage in Donegal in April 2006, months after admitting that he had been an MI5 agent for more than 20 years.

Three years later, the Real IRA said it was responsible.

Mr Donaldson had worked for Sinn Féin as an administrator at Stormont.

A man who said he worked as an informer for the intelligence branch of the police told Spotlight that Mr Adams sanctioned the murder.

The former spy was in the IRA and Sinn Féin. He could not be identified because of fears about his safety.