One of the guns used to kill a Catholic man in 2002 may have been stolen from a British soldier, an inquest has heard. 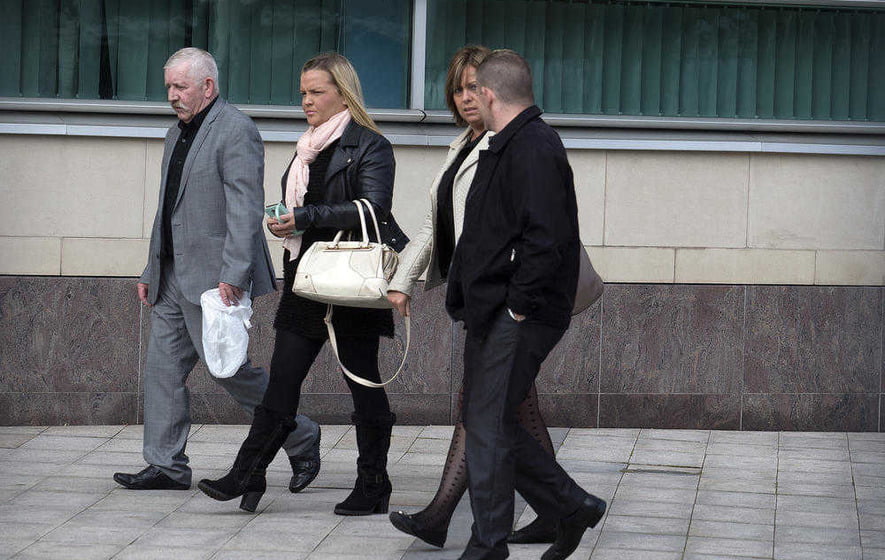 Details of the murder weapon emerged during an inquest into the murder of 20-year-old Danny McColgan as he went to work on the outskirts of Belfast in January 2002.

The father of one was shot dead by two UFF gunmen as he arrived at a post office depot in the loyalist Rathcoole estate.

The revelation comes after it emerged earlier this week that seven casings from the bullets used to shoot Mr McColgan have gone missing after being sent to England for testing.

It also emerged that a loyalist who died in mysterious circumstances days after Mr McColgan was killed had a role in the “aftermath” of the murder.

Two 9mm handguns used to kill Mr McColgan included a stolen Beretta and a Browning “type” handgun which had been used in previous loyalist paramilitary attacks.

Neither weapon has ever been found.

Senior Coroner John Leckey heard yesterday that the legally held Beretta was stolen during a robbery at a school at Orchard Place in Newtowenards, Co Down, in 1999 and that it “most likely” belonged to a member of the Royal Irish Regiment.

Retired PSNI officer Roy Suitters, who led the McColgan murder investigation, told the court that before someone is issued with a personal protection weapon it is test fired so it can later be traced.

Under questioning from the McColgan family barrister Andrew Moriarty, Mr Suitters said the weapon was “unlikely” to have been issued to a part time police officer but “more likely to be a member of the RIR” or someone with a high profile.

He suggested that because the robbery took place in a school “it’s more likely to be the RIR”.

The Beretta handgun is understood to have been used a second time during a UDA feud in September 2003 in an attack at the home of Sammy Duddy who was a spokesman for the Ulster Political Research Group.

It also emerged during the hearing that according to police documents a person believed to be a suspected loyalist “was heard to say that police searches (connected to the case) were no problem, as they had someone on the inside in Newtownabbey police station”.

Mr Suitter later said he was not aware of “any corrupt cops in Newtownabbey police station” under questioning form Mr Moriarty.

At an earlier hearing it emerged that deceased UDA member Stephen McCullough had been released by police without being questioned after offering information about the murder of Mr McColgan.

Hours later he was found dead at the foot of Cavehill in north Belfast in unexplained circumstances.

Police say McCullough was a member of a UDA ‘punishment’ team in Rathcoole and offered to provide information to police after the shooting.

“The information was after the event (the murder) he had a task to do and it went wrong.

“I am not going to say he was going to be murdered, but there were going to be consequences for him.”

Mr Suiiters added that the role played by McCullough was in the “aftermath” of the murder.

Earlier it has been suggested that the dead loyalist may have had concerns about the removal of weapons and clothing which prompted him to approach police.

Casings from bullets fired during the murder of Catholic man Danny McColgan have been lost, an inquest has heard. 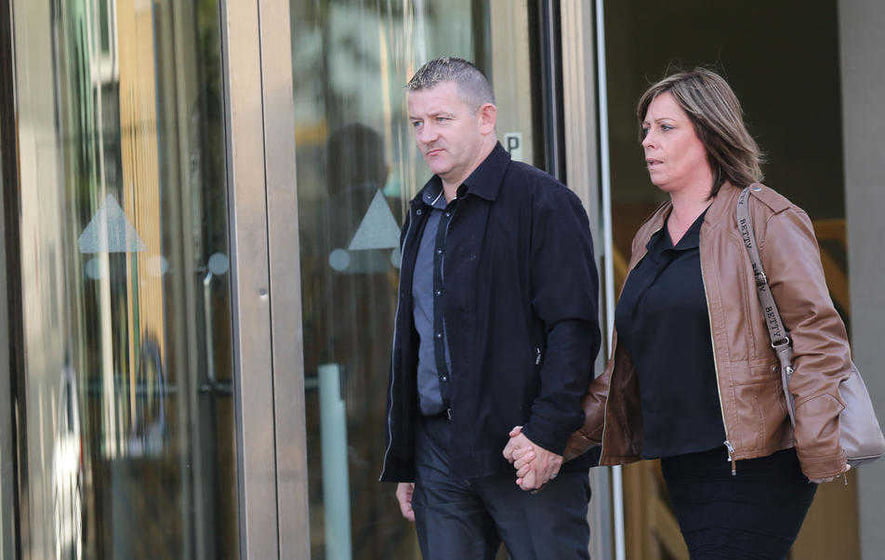 Kevin McColgan, a brother of Daniel, on the way out of the inquest yesterday

The 20-year-old postal worker was shot dead by the UFF as he went to work on the outskirts of north Belfast in January 2002.

The father-of-one was shot several times by two gunmen as he arrived at a post office depot in the loyalist Rathcoole estate.

Senior Coroner John Leckey also heard that a dead loyalist linked to the murder was a member of a UDA ‘punishment’ squad.

Stephen McCullough was found at the foot of Cavehill in north Belfast in mysterious circumstances days after Mr McColgan was gunned down.

Six were sent to Forensic Science Northern Ireland for testing while the PSNI sent the remainder to England for examination.

It has now emerged the seven casings sent to England have gone missing.

Andrew Moriarty, barrister for the McColgan family, said it was “absolutely extraordinary that bullet casings in a murder inquiry should be lost”.

A solicitor for the PSNI said the casings had been tested in 2002 but gave up no clues.

He was unable to say if they had been retested during a 2007 review of the case.

It was revealed that the weapons used to kill Mr McColgan included a stolen Beretta handgun and a “Browning type” pistol which had been used in two ‘punishment’ shootings, two attempted murders and several other attacks between 1997 and 2002.

However, two Public Interest Immunity certificates have been issued to the PSNI and British Ministry of Defence in the case and many of the documents handed over to the McColgan family’s legal team have been heavily redacted.

During the hearing in Belfast, retired PSNI senior investigating officer Roy Suitters said officers under his command failed to make him aware that loyalist Stephen McCullough offered information about the murder after he was arrested on suspicion of drink driving.

He described that as a “significant mistake” and confirmed that an officer had subsequently been removed from the investigation.

McCullough was later released from custody and hours later was found dead after falling from Cavehill in unexplained circumstances.

Special Branch documents read out at the inquest revealed that McCullough was involved in a UDA “punishment team in the Rathcoole area” and the court heard he may have had a role in the murder of Danny McColgan.

It also emerged that CCTV cameras at the postal depot, which should have been turned on, were in fact not recording.

Mr Moriarty revealed that other “intelligence documents” referred to Mr McColgan “being set up”.

He said there were also documents referring to his “shift pattern being passed on” and suggested this could only have been done by “a fellow employee”.

After lengthy discussion Mr Leckey ruled that questioning of Mr Suitters about matters that could not be supported by evidence were “outwith the scope of the inquest”.

It was claimed that a senior UFF figure had told members that Mr McColgan was murdered in revenge for the death of Protestant teenager Thomas McDonald who was killed in north Belfast September 2001.

He died after being knocked off his bicycle by a Catholic woman after a brick was thrown at her car at Whitewell Road in north Belfast.

The woman was later convicted of manslaughter.

ADDITIONAL police documentation relating to the murder of Catholic postman Danny McColgan has been found, an inquest heard yesterday. 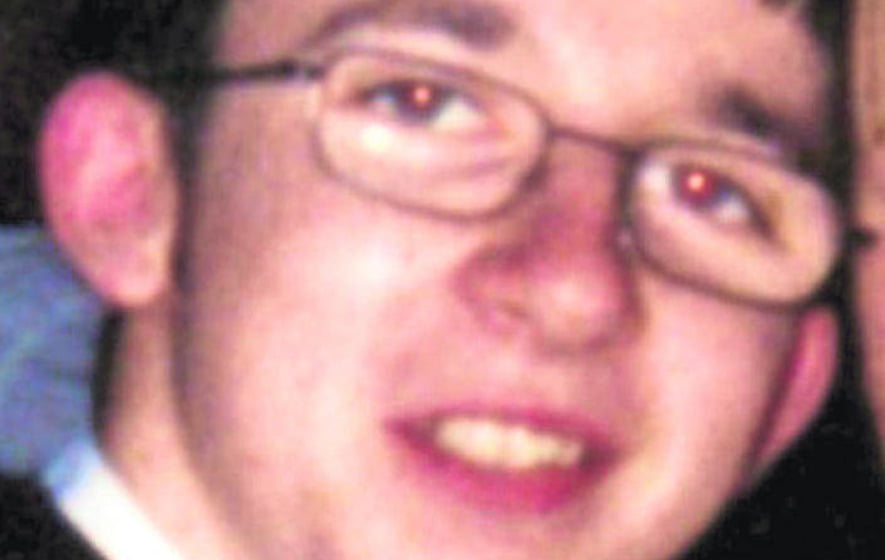 The court was told the information was discovered on a PSNI computer system that is “being replaced”.

The inquest also heard the documentation may relate to the weapon or weapons used in the killing of the 20-year-old.

Mr McColgan was shot dead by the UDA as he arrived for work at a sorting office in the loyalist Rathcoole area in January 2002.

Nobody has ever been convicted of the killing of the father-of-one, who was from the Longlands area of Newtownabbey.

Initially the UDA used the Red Hand Commando cover name but later admitted it had carried out the shooting itself.

The inquest into Mr McColgan’s death began last year and a previous hearing heard he had been shot 10 times.

The inquest, sitting in Laganside courts in Belfast, was due to hear evidence yesterday from a retired senior investigating police officer.

However, legal representatives asked senior coroner John Leckey for an adjournment after “additional documentation” had been found on a police computer system.

A solicitor for the PSNI said the information had been “located in a system that is being replaced”.

He added that the computer system had “been obsolete” for some time.

The court heard the documents required redaction before being handed over, which may not “be completed by the middle of September”.

The inquest is due to resume on September 28.