Bloody Sunday: Fresh review into case of ‘Soldier F’ to be carried out 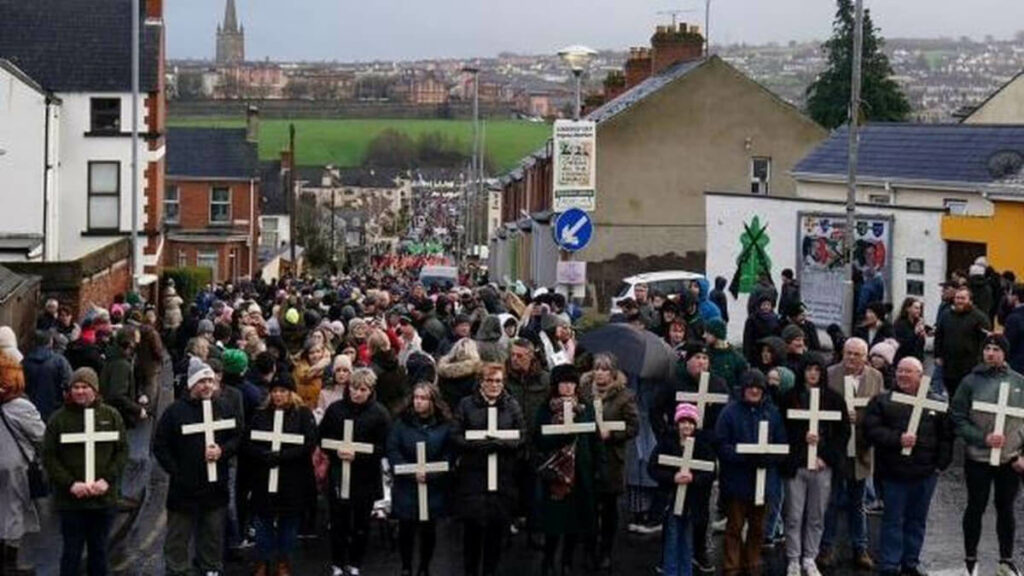 People take part in a Bloody Sunday memorial march on the 50th anniversary of the massacre, in Derry in January

Prosecutors in the North are to conduct a “fresh review” of the case against “Soldier F” after senior judges in Belfast refused leave to appeal a ruling earlier this year quashing a decision to discontinue legal proceedings against the ex-serviceman over Bloody Sunday.

Relatives of those killed on Bloody Sunday in Derry in January 1972 called for the Public Prosecution Service (PPS) to immediately recommence committal proceedings against Soldier F.

The former member of the British army’s Parachute Regiment was facing charges of two counts of murder and five of attempted murder when the case against him was discontinued.

Mickey McKinney, the brother of William McKinney — one of two victims in relation to whom Soldier F faced a charge of murder — said the PPS had “taken no steps in the last 5½ months” since its decision to discontinue proceedings was quashed, and “we deserve to see desire and determination on the part of the PPS in securing Soldier F’s return for trial to the Crown Court”.

Fearghal Shiels of Madden & Finucane Solicitors questioned why the PPS had announced a review rather than recommence proceedings, saying the relatives’ confidence had been “damaged and this does nothing to restore it”.

However, relatives of victims seeking the prosecution of three more former British soldiers were denied permission to take their legal battle to the Supreme Court.

Leave was refused to appeal a decision that the army veterans should not go on trial in connection with six of the killings in Derry 50 years ago.

Lady Chief Justice Dame Siobhan Keegan identified no points of law of general public importance requiring consideration by the Supreme Court. “The court fully understands the significance of this issue to the bereaved families but reiterates that the court was concerned only with the test for prosecution applied by the PPS,” she said.

Thirteen people were killed when members of the Parachute Regiment opened fire on civil rights demonstrators in Derry on January 30th, 1972. Another of those wounded died later.

In 2010 the Saville Inquiry into events on Bloody Sunday established the innocence of all of those who died.

Victims’ families brought legal challenges against decisions which meant five of the former paratroopers would not face trial for some of the killings.

In July last year the PPS announced it was discontinuing charges against Soldier F for the murders of William McKinney (26) and James Wray (22), plus at least five counts of attempted murder. The case against him was reviewed following the collapse of separate criminal proceedings against two other military veterans for Troubles-era offences.

Based on an assessment of the admissibility of evidence from the time, it was concluded that the test for prosecution was no longer met. The PPS was also challenged for not charging ex-members of the regiment with the murders of Mr McKinney, Jackie Duddy (17), Michael Kelly (17), John Young (17), Michael McDaid (20), and 41-year-old father of six Bernard McGuigan.

At the time of the shootings the Royal Military Police (RMP) took statements from soldiers who opened fire, with further accounts prepared for the original tribunal chaired by Lord Widgery in 1972. The case centred on a dispute about whether those statements would be ruled inadmissible in any criminal trial. According to the families, the prosecuting authority’s assessment of the evidence was legally and fundamentally flawed.

In March this year High Court judges quashed the decision to drop the murder charges against Soldier F and directed the PPS to reconsider its determination.

But they dismissed separate challenges to the PPS deciding against prosecuting other retired servicemen in connection with six of the deaths, finding that a senior prosecutor had applied the correct legal test in those cases.

With three of those former soldiers understood to still be alive, victims’ families and the PPS had both sought permission to have the decisions judicially scrutinised by the UK’s highest court.

Following Tuesday’s judgment, a spokeswoman for the PPS said it “considered that the Divisional Court ruling of March 2022 gave rise to points of law of general public importance that would have merited consideration by the Supreme Court.

“Now that the Divisional Court has ruled that this is not the case, there can be no further appeal and the PPS will conduct a fresh review of the case against Soldier F.

“We acknowledge the frustration of the families directly involved in the prosecution of Soldier F to date,” the spokeswoman said, adding that prosecutors “aim to confirm the outcome of the review to the families and Soldier F’s legal representatives as soon as possible.”