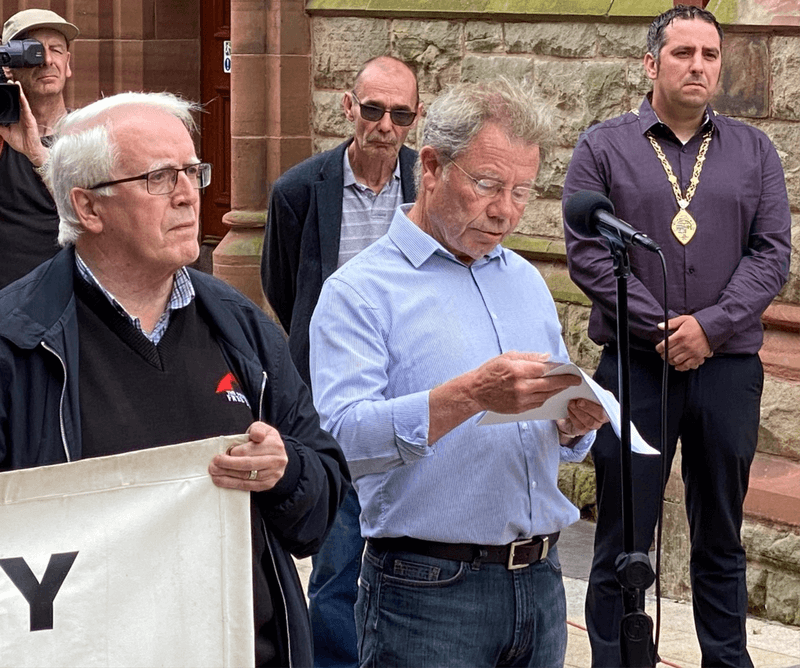 Yesterday, my family – the family of William McKinney – who was murdered in Glenfada Park on Bloody Sunday, met with a very senior delegation from the Public Prosecution Service at the City Hotel – less than 100 yards from this spot – in relation to the ongoing prosecution of Soldier F, which was announced amongst much publicity in March 2019.

We were joined yesterday by the brothers and sister of Jim Wray. Jim was murdered just a few feet in front of my brother Willie. Jim was aged just 22 and Willie was 27. They were both engaged to be married when they were murdered. After Jim was mortally wounded, a soldier fired another shot into his back at close range, killing him stone dead. Joe Mahon aged just 16 witnessed this event and feigned his own death for fear of a similar fate. Joe Friel and Michael Quinn, although badly wounded in Glenfada Park managed to escape to the relative safety – at that time – of Abbey Park. Minutes later Gerry McKinney (a father of 8) and Gerry Donaghey would be murdered in Abbey Park by Soldier G, who was the partner of Soldier F.

Yesterday we were also joined by Joe Friel and his family and by the family of Patsy O’Donnell. Patsy was shot in the shoulder as he protected a middle aged lady, he was then arrested and sustained a head wound after being batoned on the head by a paratrooper. We were joined in spirit by Michael Quinn and Joe Mahon who due to the short notice of the meeting and other unforeseen circumstances, were unable to be present.

I can say that all of us who congregated yesterday to receive the inevitable bad news about the course that this prosecution was taking after the result in the Joe McCann case, were greatly encouraged by the presence of other Bloody Sunday family members, and Wounded who in 2019, were left very disappointed by decisions not to prosecute other identifiable paratroopers for the murder of their loved ones.

They always have had our back, and they continue to inspire us and to drive us on. We also acknowledge with thanks the presence and support of our local elected representatives and the public who attended yesterday – and here again today – in constant support of us.

It is not without some degree of irony that the bad news that we received yesterday from the PPS was delivered at the City Hotel. On Bloody Sunday, 1972, the world’s media were resident at that hotel. That evening, a few short hours after our loved ones were murdered and wounded, the elaborate cover up about the events of Bloody Sunday, instigated by Colonel Maurice Tugwell – the British Army’s propagandist in chief – went into global overdrive.

Photographs, video and audio footage, and eye witness accounts recorded by Irish, British, other European and US journalists staying at the City Hotel helped to firmly bury Tugwell’s and the British Army’s lies. Yet the cover up continues today, nearly 50 years on.

In 1992 the Bloody Sunday Justice Campaign was formed. The key demands of the Campaign were:

1. the repudiation of the Widgery Tribunal whitewash;
2. the universal declaration of the innocence of all of the victims of Bloody Sunday; and
3. the prosecution of those responsible.

In 2010, we proudly achieved the first two limbs of the Campaign’s demands when the Bloody Sunday Inquiry consigned the Widgery Report to history, and all of the victims were declared innocent. Our focus immediately turned towards the realisation of the final demand of our long campaign – holding those responsible for the murders and attempted murders of our loved ones to account before a criminal court. They ARE criminals and this is where they belong.

This, however, has been a long and difficult road for the families and wounded. PSNI promises to fully investigate the events of Bloody Sunday were soon followed by a decision to suspend the police murder investigation indefinitely due to an alleged lack of money. It was only when the families lodged High Court proceedings challenging that decision that additional funds were found and the investigation recommenced.

In addition, we have been very troubled by the stance which the Public Prosecution Service has taken in relation to a number of key issues, in particular, its decision to remain neutral in the issue of Soldier F’s anonymity, and its failure to abide by commitments to have the issue of Soldier F’s anonymity resolved well before his committal proceedings reached the District Judge’s court in March of this year.

The PPS are supposed to represent and protect our interests. We do not believe that it has properly done so. We had to instruct our own lawyers to take this matter to the High Court to bring the issue to a head, yet it remains unresolved. The District Judge granted Soldier F full anonymity, yet the Bloody Sunday Inquiry granted him only partial anonymity, in relation to his surname only. The PPS permitted Soldier F to disable his camera, in effect granting himself screening, something which he never even applied for. However all of the families witnessed Soldier F give evidence in open court in London over 2 days in 2003.

The families of the Bloody Sunday victims and the wounded know very well the true identity of Soldier F, and we have done for 25 years. We are not interested in any form of retribution against him, but we were entitled to see him appear in Court. That is what open justice is all about. Judge Magill in Bishop Street did not agree.

The PPS told us yesterday that it intends to go back to Court next Friday, 9 July in order that Soldier F can be formally discharged. It will tell the Court that it will offer no further evidence and the judge will not return him for trial. We will be going to the High Court in Belfast next week to attempt to prevent that from happening.

The truth about Bloody Sunday was set free on these steps in June 2010. We will keep going and will continue to pursue justice for our brothers and fathers who were murdered on our streets. We will meet head on any British attempts to subvert justice and the rule of law.