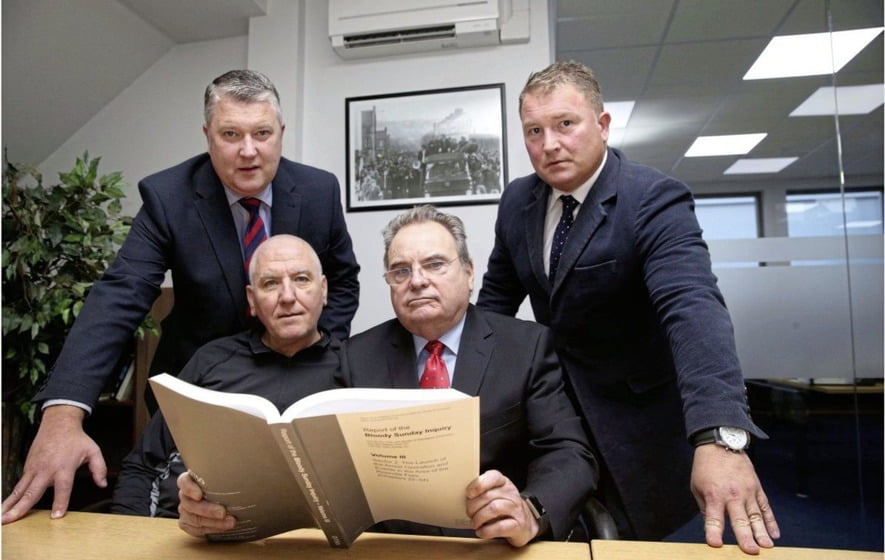 As families gather in Derry today to hear a decision on whether any of the soldiers present on Bloody Sunday will face prosecution, standing with them will be leading human rights lawyer Peter Madden, who has supported them through the highs and lows of their campaign. Ahead of the landmark decision he speaks to Allison Morris about what has been the defining case of his lengthy, legal career.

ALMOST three decades after the Bloody Sunday Initiative was set up, the Public Prosecution Service will announce today whether any members of the Parachute regiment who opened fire on civil rights marchers on January 30, 1972 should face criminal prosecution.

It has been a lengthy battle by relatives of the 13 victims and numerous injured – one who died several months later – but throughout that time lawyer Peter Madden, of internationally renowned law firm Madden and Finucane, has been a constant presence, supporting the majority of the families from the beginning of their campaign.

Mr Madden set up the law firm with solicitor Pat Finucane in 1979. His business partner would later be murdered by loyalists, shot dead in his north Belfast home in February1989.

Just months later, in August of that year the Bloody Sunday Initiative met for the first time in what would be the start of the campaign to secure a public inquiry.

At first Mr Madden worked on the case along with Martin Finucane, a brother of his murdered business partner.

They were later joined by solicitors Ciarán and Fearghál Shiels.

The brothers were from the Creggan estate and their parents and grandparents had marched on Bloody Sunday. They were able to use their local knowledge to help identify and trace more than 400 witnesses to the atrocity.

Ciarán Shiels said a key part of the campaign was contacting those wounded on Bloody Sunday, who up until that point had not told their story.

“No one had ever listened to the wounded before, some of these people had never been at a meeting and so when they sat down and started to talk they were telling their story for the first time.”

“We traced witnesses across Europe, and as far as America, Canada and Australia, I was in Germany a few times taking statements”, he said.

By 1998 when Tony Blair announced an inquiry and appointed Lord Saville to chair the proceedings, the team at Madden and Finucane had already carried out years of painstaking forensic work.

“Of course at that stage we didn’t know what was going to happen to the information we were gathering, when the inquiry was called we’d already a mountain of material, coordinated and properly archived ready to hand over to the inquiry team.

“Once the inquiry was announced it was ‘all hands to the pump’.

“It was an administrative nightmare, the scale of was like nothing else we’d ever dealt with, there were five separate teams working on it at one point.”

When the soldiers won an appeal to have their evidence heard in London rather than Derry, the legal team and the families travelled weekly to hearings at Westminster Central Hall.

Amid all this the lawyers detective work continued.

Mr Madden said: “We were coming up against Saville’s team every now and then. We were doing our own investigation and sourcing our own people. I remember going over to America to meet Luke Haag, a firearms expert, the world’s leading firearms expert in fact, who had a shooting range in the Arizona desert.

“He got hold of an SLR (used by soldiers in Northern Ireland ) to do a demonstration and produced a report.

“So we were saying to Saville ‘we are doing all this work’ and they were saying back ‘no that’s our job’ they didn’t like us doing it”.

The team also hired experts to recreate a virtual reality model of the area where the killings took place.

Ciarán Shiels said: “One side of Rossville Street hadn’t really changed since 1972 but the other side had completely changed because you no longer had the Rossville flats, so we had to reconstruct that, we had a computer expert and architects, we went to the city council and got all the photographs and plans of the area as it would have looked at the time. While the Saville team may not have liked us doing it they took the information from us”.

In June 2010 as Lord Saville delivered his findings, the legal team along with two members of each family were at Derry’s Guildhall from early in the morning, still unaware of what the much anticipated report would say.

“We were allowed in to read it but we weren’t allowed to talk to anyone, they took our phones away and we were locked in a room”, said Mr Madden.

Thousands of people gathered outside the Guildhall and when a thumbs up was seen through an upstairs window a huge cheer went up from the crowd.

Martin Finucane was outside the Guildhall supporting the extended families.

“It was rollercoaster of emotions both inside and outside, people were on edge with anticipation and then we seen the thumbs up and knew that was a good sign”, he said.

“It was emotional for everyone, unbelievable a memorable day for us all.”

The crowd watched on a large screen as the then Prime Minister David Cameron addressed Westminster saying the Bloody Sunday killings were “unjustified and unjustifiable”.

Compensation payments to the families of the dead and injured have only just started to be settled by the Ministry of Defence, almost nine years after Lord Saville’s findings.

Today the families will find out if any of the British soldiers will face criminal charges.

Mr Madden said while the legal test for prosecution appears to have met for a number of the soldiers “it’s obvious that there is a campaign in England with major players in the background agitating against it”.

“Political pressure like that is hard to withstand,” he said.

“The families have been very strong and they never forgot we were doing this work when there was no inquiry and not even the hint of an inquiry.

“They campaigned long and hard to profile their case and they’ve given it prominence, and remember this was all caught on camera at the time,” he said.

“I feel we’re almost at the conclusion, if there are prosecutions we are not really involved in that, apart from in a supportive role to the families.

“But I’m very proud of what we’ve achieved, what the families achieved, this was no ordinary job, these were not ordinary circumstances,” Mr Madden added.