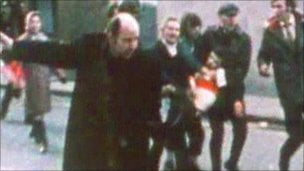 Witness protection for Soldier 027, who told panel that members of his company had been told to ‘get some kills’.

One of the ex-paratroopers who gave evidence to the Saville inquiry has been living under a witness protection programme for 10 years amid fear that he is at risk of attack by some of his former comrades.

The man, who was given the cipher Soldier 027, told the inquiry that soldiers in his company had been encouraged to “get some kills” the night before Bloody Sunday, and that this had been seen as “tantamount to an order”. Two of his former comrades subsequently shot between eight and 10 demonstrators, he said.

When Soldier 027 gave evidence at the inquiry it emerged that he had already entered a protection programme, organised by Scotland Yard and funded by the Northern Ireland Office. Documents submitted to the inquiry outline an incident in which Soldier 027’s landlord was badly beaten by an unidentified man who warned that the former paratrooper faced “dire consequences” if he gave evidence.

A statement from a Scotland Yard officer, Detective Superintendant Geoffrey Hunt, who helped to organise Soldier 027’s protection, said he had “a real and genuine fear for his personal safety”, adding that: “Others attached to the regiment, who may feel loyal to the regiment … may deem this individual to be a traitor.”

Soldier 027 was a part-time painter and decorator when the inquiry began. He is reported to have been given a deposit on a house in a different area. Some documents suggest that he may have emigrated.

Lawyers for his former comrades have denied his claims, and one has suggested that he is a “fantasy merchant” who has been seeking to cash in on events.

Soldier 027 had been a 19-year-old radio operator with the Support Company of 1 Para in January 1972. In October 2002, speaking from behind a screen, he told the inquiry that he had not seen any demonstrators carrying firearms or bombs, or anything that justified opening fire. “I had the distinct impression that this was a case of some soldiers realising this was an opportunity to fire their weapon and they didn’t want to miss the chance,” he said.

Soldier 027 said that two soldiers in particular – one known as Lance Corporal F, who gave evidence, and Soldier G, who has since died – appeared to be operating according to a plan. “I have always been satisfied in my own mind that Lance Corporal F and Soldier G probably shot eight or 10 people that day,” he said. “I thought it was their aggressive, positive actions which incited a few other loonies to join in. Unspeakable acts took place on Bloody Sunday. There was no justification for a single shot I saw fired.”

The inquiry has banned identification of any soldiers involved, other than senior officers or those who went on to become senior officers, along with a former major called Ted Loden, who commanded the company that fired most of the fatal shots, and a former private called David Longstaff, who accepts that his name is already in the public domain.

One soldier who fired the fatal shots is thought to have died in southern Africa, while a number were moved to the SAS.

One of those who joined the SAS, identified as Soldier S, was deployed to the Middle East and told the inquiry that he had killed “lots of people” during his career.