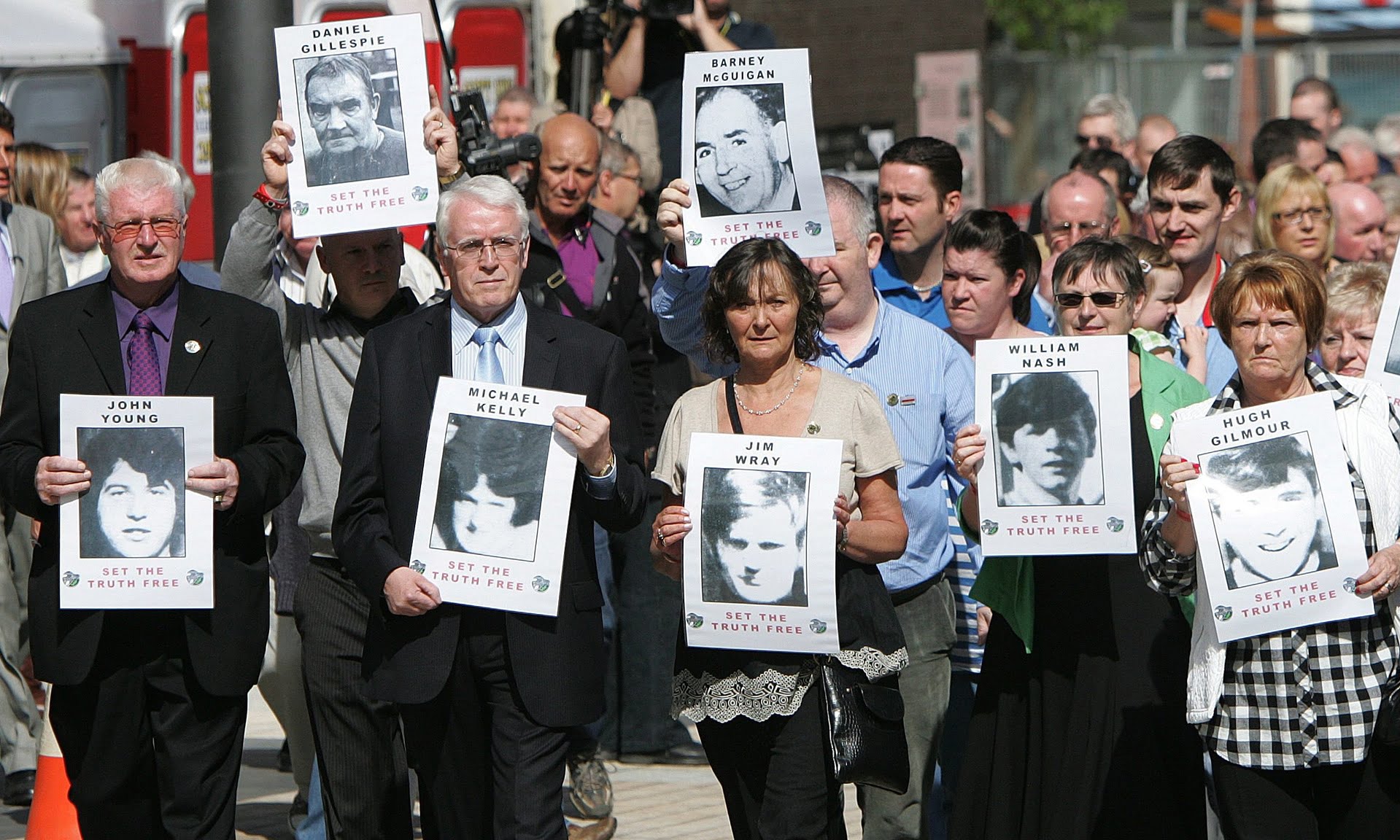 Detectives in Northern Ireland investigating the Bloody Sunday shootings in 1972 have arrested a former British soldier in County Antrim.

The Police Service of Northern Ireland’s legacy investigation branch said he was 66 years old. He would have been 23 at the time of the shootings.

It is the first arrest since the events of Bloody Sunday nearly 44 years ago.

Thirteen civil rights demonstrators were killed by members of the Parachute Regiment on the streets of Derry in January 1972. Another victim of the shootings died months later.

The officer leading the investigation, DCI Ian Harrison, said the arrest marked a new phase in the overall inquiry that would continue for some time.

The soldier arrested is understood to be a former member of the Parachute Regiment, who was known during the government-commissioned inquiry undertaken by Lord Saville simply as Lance Corporal J.

He is being questioned specifically about the killings of 15 year old William Nash, Michael McDaid, 20, and John Young, 17, in the 1972 massacre. The retired soldier is also suspected of the attempted killing of William’s father Alexander.

The investigation was launched in 2012 after the Saville inquiry found none of the victims posed a threat to soldiers when they were shot. After the publication of Saville’s report in 2010, David Cameron apologised for the army’s actions, branding them “unjustified and unjustifiable”.

In September, the PSNI announced that its legacy branch officers intended to interview seven former soldiers about their involvement on the day. The suspect detained on Tuesday has been taken to a station in Belfast for questioning.

The retired soldier was formally arrested in Antrim police station. It is not clear whether he is from Northern Ireland or had previously been invited from England for questioning.

In June, the BBC reported that the PSNI had contacted more than 100 soldiers as part of the investigation. The contacts followed renewed criticism of the police inquiry by some families of Bloody Sunday victims.

Harrison said at the time his team had completed its civilian witness inquiries and made contact with more than 100 soldiers to “determine if they are willing to engage with us”. He stressed that the soldiers were witnesses, not suspects, and were therefore not obliged to speak to the team.

Some Bloody Sunday families have criticised the police investigation. In a letter to Harrison this year, the families said they were losing faith in the investigation because they had “heard nothing from the PSNI since a meeting in January and were entirely unaware of what progress had been made”.

Peter Madden, the solicitor who represented most of the families at the Bloody Sunday inquiry, said: “This is a major step forward in the investigation into the murders. The question is going to be whether his identity will be disclosed to the public.

“In the Saville inquiry, the names of the shooters were not identified. They were known by different letters. Judging from their voices during the inquiry, most of them were English.

“We have had several meetings with the PSNI investigation team. There seemed to be sufficient grounds for arresting people before now.”

None of the families has accepted the £50,000 compensation offered by the MoD. Civil compensation claims are currently going through the Northern Ireland courts.

John Kelly of the Museum of Free Derry, whose 17-year-old brother Michael was killed on Bloody Sunday, said: “No soldiers have ever been arrested before now. We have been looking forward to this for nearly 44 years.

“It’s the beginning of the final part of the process. I don’t know whether this is someone who has been living in Northern Ireland or England. This is about getting justice for our loved ones, the innocent people who were murdered.

“I hope it will not take long to see these people in court being charged for what they did on Bloody Sunday – killing children. There should have been arrests when Saville produced his report. We believe that everyone who fired that day should have been prosecuted.

“My brother Michael was 17 when he died. I’m looking forward to seeing the soldier [who killed him] being arrested. I hope we will see these people in court soon for murder and attemped murder.”

Linda Nash, one of William Nash’s sisters, said: “I am sceptical at this stage. I am aware of the political situation here so I will await to see if a soldier is charged. I’ve had way too many disappointments in the past to feel anything.”

The PSNI has said that 34 military and 310 civilian witness statements have been recorded so far in its investigation into Bloody Sunday.