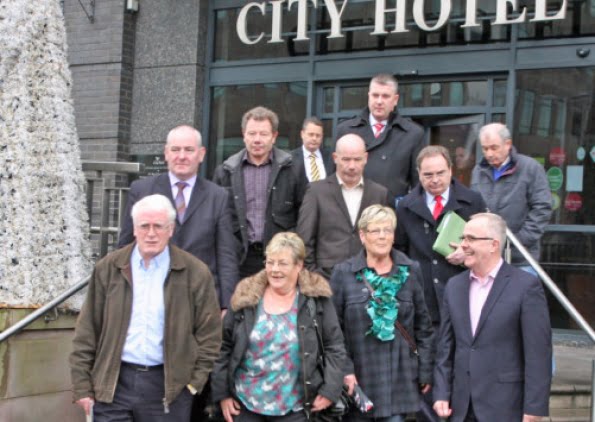 A murder investigation into the Bloody Sunday massacre will begin in January, with an initial team of 15 detectives assigned to the case and a dedicated office in Derry.

The stepping up of the probe was announced by PSNI Deputy Chief Constable Judith Gillespie and Assistant Chief Constable Drew Harris during a meeting with relatives of those murdered and wounded in the Bogside in 1972.

The relatives, accompanied by lawyer Peter Madden, sought the meeting yesterday after voicing concern about “lack of progress” in the case.

DCC Gillespie confirmed that the “complex” murder investigation would “start in earnest” next month.

“We’ve now appointed a full-time, dedicated, senior investigating officer, who’s an experienced senior detective who will lead the criminal investigation and we’re putting full-time dedicated resources in support of him to take forward that investigation,” she said.

As part of the murder investigation, police are urging eye-witnesses who gave evidence to the Saville Inquiry to come forward and make further statements.

Joe McKinney, whose older brother William – a Derry Journal employee – was murdered in Glenfada Park, said he was “relieved” by the development.

“It was a very good, very amiable meeting and the police representatives were very forthcoming in how they are planning to conduct the investigation. It seems we are making progress at last and I certainly feel relieved. This is what it has all been about.”

Peter Madden, of Madden & Finucane Solicitors, described the meeting as “fairly positive” and welcomed PSNI progress in the case.

“The Deputy Chief Constable set out the progress so far, which is that the murder investigation has now started and that there will be a dedicated office based in Derry. In January, police will begin interviewing witnesses as part of the actual murder investigation.

“Soldiers will be treated as suspects and will be interviewed in due course.

“They will be arrested and questioned about murder. The other important point is that the families will be kept informed throughout the investigation by family liaison officers who will maintain direct contact with them. This is the first real indication that things have moved forward in a big way.”

Eyewitnesses to the murder and mayhem of Bloody Sunday in 1972 will soon be encouraged to give statements to the new murder investigation, police revealed yesterday.

As the evidence gathered by Lord Saville’s inquiry cannot be used as evidence in criminal proceedings, it will be necessary to again gather the relevant evidence in the case for British soldiers’ prosecutions over the murder of 14 men and attempted murder of a further 14 on 30 January 1972.

“For the investigation to be as comprehensive and effective as possible, police will be asking for public support in the form of witnesses who gave evidence to the Saville Inquiry now making statements to detectives,” a PSNI spokesperson confirmed last night. “This is because police are precluded from using Saville testimony in a criminal investigation. Details on how this process will be facilitated will be made available in the near future.”

Yesterday’s announcement of the imminent murder investigation was welcomed by all in attendance. Police told family representatives that a designated office would be established in the city in January, staffed with a team of investigators and fully equipped for the task ahead. A family liaison officer will also be appointed to keep the Bloody Sunday families and wounded fully abreast of the case as it develops.

“To be honest, I was starting to feel dejected after the events of 15 June 2010, to put it mildly. But police seem very positive and say they have to follow where their enquiries and the evidence lead. They say they have been relying heavily on the information contained within the Saville Report and they will now follow those key areas where Lord Saville pointed out there was murder committed. After today, I have more faith in the process.”

Derry MP Mark Durkan was present at the meeting. “I think it was a useful meeting and the family representatives who were present took some comfort from the fact that an investigation team has actually been established,” he said yesterday.

MLA Raymond McCartney was also present and added: “I think the families were fairly satisfied with the outcome of today’s meeting and the progress made in ensuring this murder investigation is carried out.”