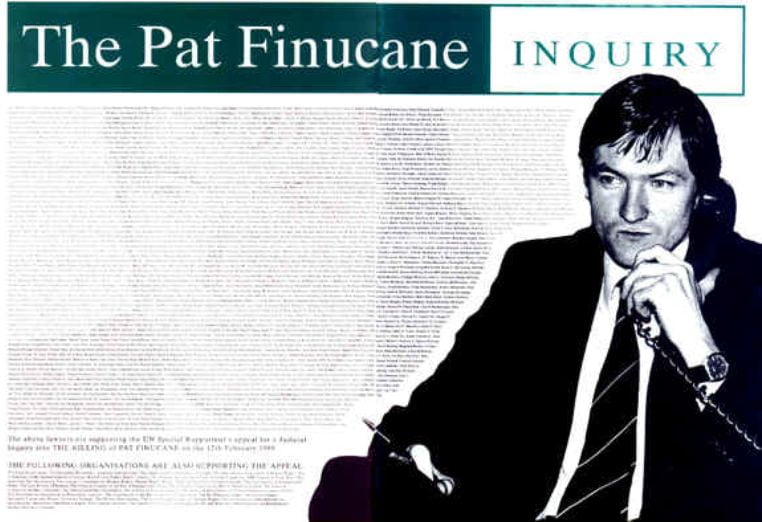 The North’s Assembly has narrowly passed a motion calling on the UK government to hold an independent, public inquiry into the murder of Belfast lawyer Pat Finucane.

It also calls on the UK government to establish the legacy mechanisms agreed at Stormont House in 2014.

The motion was put forward by Sinn Féin and the SDLP and was supported by the Alliance Party, but opposed by the DUP and Ulster Unionist Party. It was put to a vote, with 48 Assembly members (MLAs) voting in favour and 38 voting against.

In November, the Northern Secretary, Brandon Lewis, told the House of Commons the UK government had decided “not to establish a public inquiry at this time”, despite a 2001 commitment that it would do so.

Pat Finucane, a 39-year-old lawyer, was shot dead in front of his family at their home in north Belfast in 1989 by the Ulster Defence Association (UDA) in collusion with British state agents.

The Finucane family continue to campaign for an independent, public inquiry into his killing.

Following Mr Lewis’s announcement the Minister for Foreign Affairs, Simon Coveney TD, conveyed the Government’s “disappointment” and said he had made clear “that it remains the position of the Government that only through a full and independent public inquiry will a satisfactory resolution to this case be found.”

Proposing the motion on Tuesday, the Sinn Féin MLA Gerry Kelly said the publicly known facts of the case “clearly indicate a web of conspiracy and deceit and that there was an overarching conspiracy.”

The killing of Mr Finucane, he said, was a matter of “significant public interest” and the “only investigative option left” was a public inquiry.

“What happened to Pat Finuane, if it is not exposed, if it is not admitted by the [UK]government, means it can happen again, to anyone.”

The DUP MLA Paul Frew said Mr Finucane’s murder was “abhorrent” and an “appalling act” but questioned whether there was a danger of creating a “hierarchy of investigations if we do not remember all of the victims, all of the unsolved murders, and all of the investigations yet to be concluded.”

The Ulster Unionist leader, Doug Beattie, said he was “disappointed” in the motion, and while he did want to see justice for Pat Finucane his party could not support the Stormont House Agreement because it represented an “amnesty for perpetrators.”

“We had an opportunity to say there are many people out there, in the words of this motion, who are suffering, who deserve justice in exactly in the same way.

“Mr Finucane without a shadow of a doubt does deserve justice but the moment we start to categorise and say he’s a lawyer and he deserves something extra we forget about the rest,” he said.

Referring to proposals by the UK government to adopt a different approach to legacy issues to that agreed at Stormont House, the SDLP leader, Nichola Mallon, said her party could not support these.

If the UK government, she said, “takes the same approach to legacy as they have with Pat Finucane’s case, and that is to lie, to deny and cover up the truth … they will not have the support of the SDLP in making their legislation.”

The Alliance Party MLA Andrew Muir said “nothing short of” a full public inquiry into Mr Finucane’s murder would suffice and recent moves by the UK government on legacy showed a “deeply concerning, callous and cavalier attitude towards victims and survivors.”