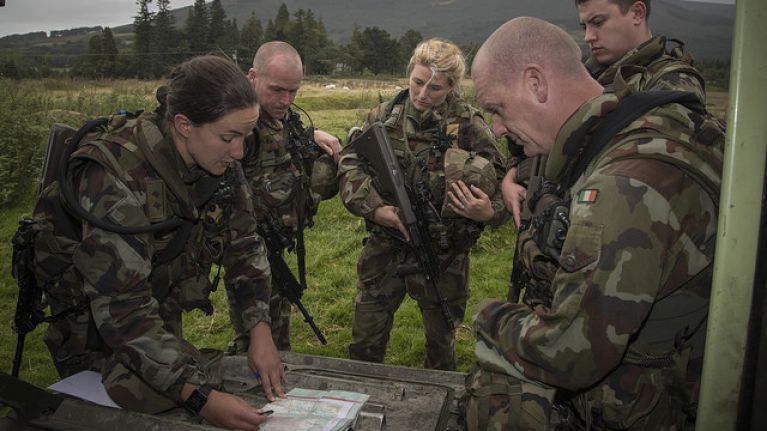 Report from the High Court in Dublin where Michael Halleron and Conor Moylan of Madden & Finucane are representing Belfast woman Orfhlaith Geraghty.

A woman claims she has not been allowed to join the Defence Forces because of a disproportionate and discriminatory ban on people with asthma.

Orfhlaith Geraghty has been given permission to bring a High Court challenge against the defence minister over the decision.

Ms Geraghty, who the court heard was an athlete and boxer who has competed at a high level, claims the policy is a breach of her right to equality.

Ronan Lavery, for Ms Geraghty, was granted leave, on a one-side only represented basis, to bring the judicial review challenge.

Ms Lavery, a leisure centre facilitator from Glen Mill Avenue in Belfast, says in an affidavit she always had an ambition to join the Defence Forces and applied last July.

After a medical examination she was told she could not because she was found to be “below the medical requirements”.

She understood the refusal was because of her asthma and appealed but her application was again rejected based on her clinical history.

She sought a review of the decision made by recruitment officer Lt Col Anthony Corcoran who offered to meet her.

She says she had successfully passed the army fitness test.

She emailed her grievances to Lt Col Corcoran who replied that an applicant with asthma and who uses an inhaler does not meet the criteria set down by the Defence Forces for recruitment. He said the regulations governing this were not in his remit.

The matter was referred to the Defence Forces human resources department which stood over the decision.

In her action, she seeks an order quashing the decision and a declaration that it is unlawful and unconstitutional.

She claims the minister has adopted a rigid and inflexible policy which prevents consideration of individual merits or exceptional circumstances.

She says her right to equality and to be free from discrimination of grounds of disability is unconstitutional, disproportionate and a breach of European Convention rights.

She also claims there “could not be any scientific basis” to refuse her because of asthma. She points out the British Army admits recruits with asthma.

Mr Lavery told Mr Justice Charles Meenan there appeared to be a “blanket policy” with regard to those with an asthmatic condition but it had not been possible to obtain a copy of the regulation which refers to the policy.

He said there are different levels of asthma and Ms Geraghty feels no consideration has been taken into account of her individual condition.

Mr Justice Meenan was satisfied that arguable grounds had been made out to grant leave to bring the case. He said it could come back to court in June.