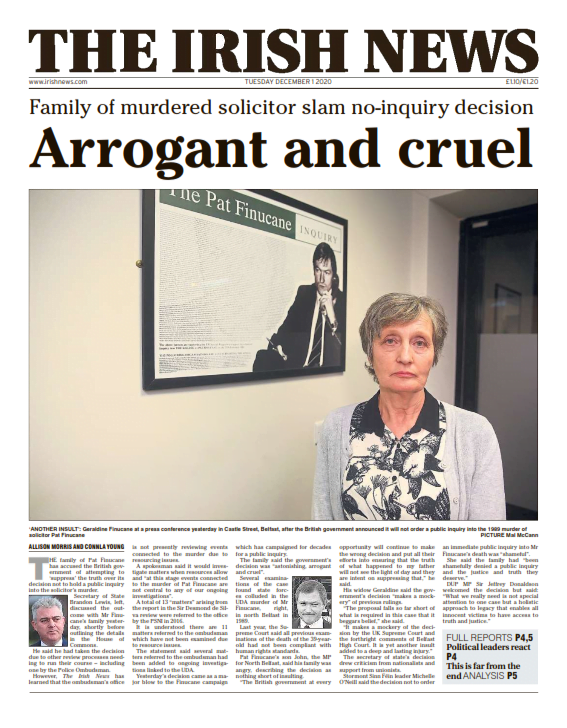 THE widow of Pat Finucane last night described a decision by the British government to once again refuse to hold a full public inquiry into her husband’s murder as “yet another an insult”.

Geraldine Finucane’s comments came as the British Government said it would not order an immediate public inquiry into north Belfast solicitor’s 1989 killing.

Several examinations of the case found state forces colluded in his murder.

Last year, the Supreme Court said all previous examinations of the death had not been compliant with human rights standards.

However Northern Ireland Secretary Brandon Lewis said he had taken the decision due to other review processes needing to run their course.

He discussed the outcome with Mr Finucane’s family yesterday afternoon, shortly before outlining the details in the House of Commons.

“I am not taking the possibility of a public inquiry off the table at this stage, but it is important we allow ongoing PSNI and Police Ombudsman processes to move forward,” he said.

But Mr Finucane’s widow Geraldine, who has been campaigning for decades for a public inquiry, said the government’s decision “makes a mockery” of previous rulings.

“The proposal falls so far short of what it required in this case that it beggars belief,” she said.

“It makes a mockery of the decision by the UK Supreme Court and the forthright comments of Belfast High Court. It is yet another insult added to a deep and lasting injury.”

Mrs Finucane said: “In failing to establish a public inquiry into the murder of Pat Finucane, the British Government have not only set themselves against my family but also the Irish government, local, national and international political parties, political institutions, legal and human rights groups domestically and internationally.”

Father-of-three Mr Finucane (39) was shot dead in his family home in north Belfast in February 1989 by the UDA in an attack found to have involved collusion with the state.

The couple’s son, Sinn Féin’s North Belfast MP John Finucane, said the Northern Ireland Secretary’s response was a disgrace, adding the family had waited 31 years for an effective investigation into the murder of their father.

“The British Government at every opportunity will continue to make the wrong decision and put all their efforts into ensuring that the truth of what happened to my father will not see the light of day and they are intent on suppressing that,” he said.

Mr Lewis told MPs he would “consider all options available to me” to meet the Government’s obligations to ensure an effective investigation into the death.

He added in the Commons: “This Government has demonstrated that when the public interest requires it, we will establish public inquiries to look at any potential failings by government or state bodies – as, for example, we’ve done with the Manchester bombing.”

He said Mr Finucane’s death was just one example of the violence and tragedy experienced by so many people across Northern Ireland, the rest of the UK and Ireland during the Troubles.

He added the Government remains committed to dealing with the “legacy of the past in its entirety”.

The Supreme Court acknowledged Mrs Finucane had been given an “unequivocal undertaking” by the Government following the 2001 Weston Park agreement with the Irish Government that there would be a public inquiry into the murder.

The judges found that the Government had been justified in later deciding against holding one.

The court said it was up to the Government to decide what form of investigation was now required, if one was feasible.

Amid a Government delay in responding to the judgment, Mrs Finucane took fresh judicial review proceedings against the state.

In a statement released last night PSNI Chief Constable Simon Byrne said: “It is our view that there are currently no new lines of inquiry.

“We now need to decide if a further review is merited given all the previous investigations into this case.”

He promised to inform the Finucane family once a determination has been made.

“If we determine that a review should take place, we will then have to decide if we are best placed to carry out that review.

“As it stands it is unlikely that we would enjoy a perception of independence in this case, given the accepted position of state involvement in this matter.

“Therefore, it is highly likely that any review would need to be conducted independently.”