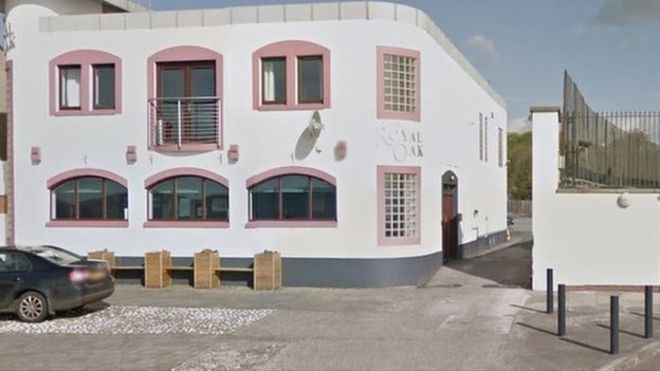 The assault took place at the Royal Oak bar in Carrickfergus

Three men have been jailed over a “vicious” attack on a doorman who ended up with a fractured skull after he refused one of them entry to a pub.

The victim’s jaw and cheekbone were also broken after he was hit with a fire extinguisher at the Royal Oak pub in Carrickfergus, County Antrim.

Brothers Ian and Brian Sinclair, and Glen McCullough, were sentenced for their part in the attack.

A second bouncer was also assaulted during the incident last March.

It began when the doormen refused to let 38-year-old Ian Sinclair into the bar.

Sinclair later claimed this was ‘on account of the ongoing loyalist feud involving the Gilmore family and the South East Antrim UDA.’

The judge said the attack went “well beyond a reaction to being refused a drink”, adding it was a vicious attack on a man working in a public place.

Ian and his 52-year-old brother admitted causing the doorman grievous bodily harm with intent, but their co-accused was acquitted of the same charge.

Brian Sinclair also pleaded guilty to a charge of common assault against the second doorman.

Ian Sinclair was handed a sentence of nine years, his brother was sentenced to six years, while McCullough received a three-year sentence.

All three men were told they will serve half their sentences behind bars, with the remaining half on licence when they are released.