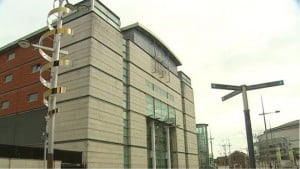 A man who bit and threatened his father with a claw hammer after being discovered sniffing aerosols has avoided prison.

Jake McClelland was given a three-month suspended jail sentence for the weekend attack at a family home in Belfast.

The 20-year-old pleaded guilty to a charge of common assault.

Belfast Magistrates’ Court heard he was sniffing aerosols on Saturday when his father appeared and attempted to reason with him.

A prosecution lawyer said the defendant produced a claw hammer and held it above his head, leaving the victim in fear of being struck.

A struggle then broke out when Jake McClelland put the hammer down and continued with his activities.

At one point he was said to have kicked out and smashed a glass table, with his father sustaining a cut finger on a shard of glass.

“The defendant also bit his father on the right side, causing bruising,” the prosecutor added.

Defence solicitor Michael Madden told the court his client had managed to stop wider substance abuse before a relationship break-up “sent him back to his old habits”.

Mr Madden said: “He hadn’t taken aerosols in four months – this was just a blip.”

Imposing a three-month prison sentence, suspended for a year, Mrs Bagnall stressed: “I wouldn’t want him to think how good it is to get off prescription drugs, and the answer is to sniff aerosols.”