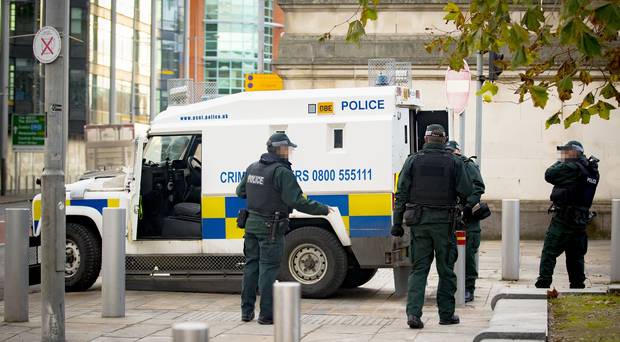 Police guard the court as two men, aged 36 and 37 are charged with preparatory acts of terrorism and suspected possession of a firearm with intent to endanger life at Belfast Court on December 1st 2017

Matthew Charles Johnston, 37, and Eamonn Hutchinson, 36, were arrested following searches in the north of the city earlier this week.

Police seized a gun and quantity of ammunition during an operation centred on the Antrim Road and Duncairn Gardens area.

Johnston and Hutchinson are jointly charged with preparatory acts of terrorism – namely test firing a firearm on November 28.

They also both face a second count of possessing a firearm and ammunition with intent to endanger life.

Appearing together amid heavy security at Belfast Magistrates’ Court, the two accused refused to stand in the dock as the allegations were put to them.

Remaining seated throughout the hearing, both men smiled and waved at up to 20 supporters gathered in the public gallery.

At one point District Judge Nigel Broderick asked: “Have they a difficulty with standing?”

A detective sergeant told the court he could connect them to the charges.

Johnston’s solicitor, Michael Halleron of Madden and Finucane, and Hutchinson’s lawyer, John Finucane, both confirmed they were not seeking bail at this stage.

Judge Broderick remanded the two accused in custody to appear again by video-link on December 22.

As they were being led back to the cells one supporter shouted out: “Go ahead lads.”

Cheers and a round of applause also broke out among those accompanying him in the courtroom.