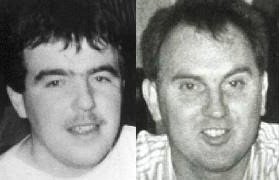 A legal battle to secure the quashing of inquest verdicts on the SAS shooting of two IRA men is set to go to the Supreme Court, it was confirmed today (Thursday, March 16).

Senior judges in Belfast have rejected claims that the tribunal into the deaths of Martin McCaughey and Dessie Grew 27 years ago failed to properly deal with suspicions of a shoot-to-kill policy.

But although they also refused leave to appeal their decision, lawyers for the dead men’s families can now petition directly for a hearing in London.

They must establish a point of law of general public importance to have the case re-examined.

“We are going to make an application directly to the Supreme Court for leave to appeal,” he said.

McCaughey and Grew died after an SAS unit opened fire on them at farm buildings near Loughgall, County Armagh in October 1990.

Although both men were armed neither of them fired any shots, provoking claims that they could have been arrested.

But in May 2012 an inquest jury found the killings were justified.

It ruled that the soldiers had used reasonable force during the operation and that the IRA men’s own actions contributed to their deaths.

They put their own lives in danger by being in the area close to a stolen car which was expected to be used in terrorist activity, according to the findings.

McCaughey’s sister, Sally Gribben, has mounted a number of legal attempts to have the inquest verdict quashed.

Her lawyers contended that the tribunal did not comply with Article 2 of the European Convention on Human Rights.

Counsel argued that relatives of the IRA men were denied the right to participate to the extent necessary to protect their legitimate interests.

It was also claimed that the coroner wrongly limited the extent of the inquest by confining exploration of the shoot to kill issue to soldiers who fired at McCaughey and Grew, and also discharged their weapons in another incident.

Last week, however, the Court of Appeal rejected submissions that the scope of the tribunal was too narrow.

They also dismissed arguments that the coroner’s failure to recall Soldier A, who first opened fire on McCaughey and Grew, rendered the process unlawful.

Now it will be for the Supreme Court to decide if there are any legal points in the case worthy of further judicial consideration.