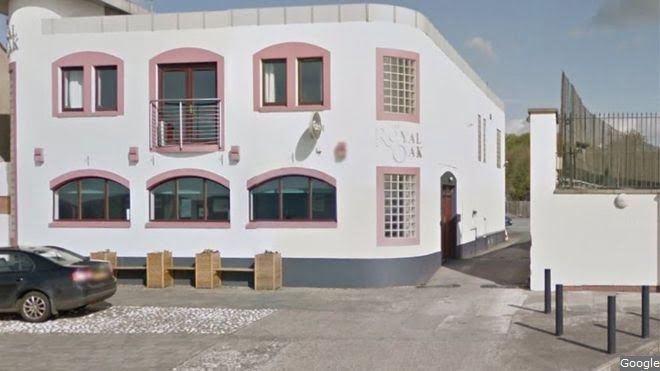 A pub doorman suffered serious injuries after being attacked with a fire extinguisher for refusing his alleged assailants entry, a court has heard.

The man remains in hospital with a blood clot to the brain and facial fractures following the weekend incident with a suspected link to an ongoing paramilitary feud in Carrickfergus.

Details emerged as three men from the Co Antrim town were remanded in custody charged with his attempted murder.

Amid heavy security at Belfast Magistrates’ Court, brothers Brian and Ian Sinclair, aged 50 and 36, appeared in the dock alongside 52-year-old Glen McCullough.

All three men were allegedly involved in an outburst of violence at the Royal Oak bar in Carrick on Saturday night.

Ian Sinclair and McCullough did not seek bail during the hearing.

Opposing an application mounted by Brian Sinclair a detective claimed there was a risk of witness interference.

He said CCTV footage shows both brothers punching the doorman after being refused entry to the bar.

Brian Sinclair allegedly forced him to the ground before Ian Sinclair lifted a fire extinguisher and repeatedly hit him as he lay in the hallway, the court heard.

According to police McCullough then picked up the extinguisher and threw it at the man’s head.

District Judge Peter King was told the bouncer is in a serious condition in hospital, where he is expected to remain for a considerable period of time.

His injuries include a blood clot and air pockets to the brain, along with fractures to his eye socket, cheek and nose.

Solicitor Michael Madden, representing Brian Sinclair, told the court the accused had all gone to the pub for a social evening.

During questioning the detective said the defendants believed the decision to stop them getting in was linked to the ongoing paramilitary feud.

He confirmed, however, that there is no intelligence suggesting a connection. The court also heard that Brian Sinclair lost a tooth during the incident.

His lawyer argued that he could be released to start a job as a rigger which would see him living in Wales until October.

But refusing the application, Mr King said: “The concern of the police is one of witness interference.

“I’m told there’s a context to all this, one of organised paramilitarism – there’s always going to be a difficulty in those circumstances.”

He remanded all three accused in custody, to appear again by video-link on 10 April.