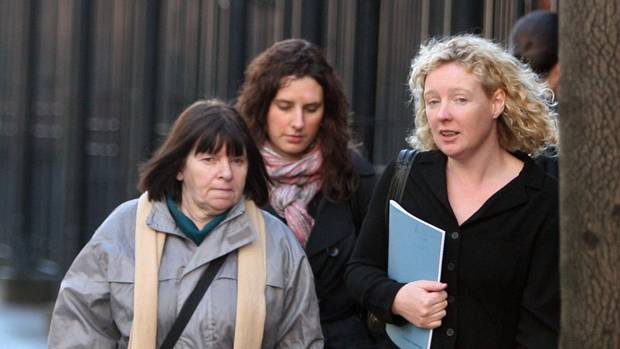 Report from the Coroner’s Court today where Madden & Finucane represent the family of Pearse Jordan.

Two police officers involved in the inquest of an IRA man killed by security forces over 20 years ago should be investigated for allegedly perverting the course of justice and perjury, a judge has been told.

Lawyers for the family of Pearse Jordan returned to Belfast’s High Court to request anonymity orders protecting the identities of Officers M and Q also be lifted.

Karen Quinlivin QC said: “It is in the public interest in people knowing and having information about wrongdoing.

“The allegation is that two police officers perverted the course of justice in a murder inquiry – that’s not minor, that’s serious – and thereafter perjured themselves in an inquest.”

He had been driving a stolen car suspected of ferrying IRA munitions when the fatal incident unfolded. He failed to stop when ordered by police and sped away from a patrol car.

The Ford Orion was finally brought to a halt on the Falls Road when police rammed the vehicle. Mr Jordan was shot after getting out of the car when he tried to run away.

Earlier this week Mr Justice Horner delivered findings in what was the third inquest into the highly contentious death.

The coroner said he was not convinced either by family claims Mr Jordan was gunned down in cold blood or by police insistence the RUC sergeant acted in self-defence.

Testimony from Officers M and Q, who were not directly involved in the shooting, was also criticised as inconsistent, contradictory and unconvincing.

Justice Horner said the officers had been “untruthful” and that one or both may have edited log books.

During Thursday’s brief hearing Ms Quinlivin argued : “If somebody is suspected of involvement in serious misconduct that’s a factor which should give rise to a review of anonymity.”

The barrister also called for the alleged wrongdoing to be referred to the Director of Public Prosecutions for further investigation.

“We disclose that an offence may have caused against the law of Northern Ireland,” she said.

But legal representatives for the PSNI and Officers M and Q opposed the application.

He said: “If anything the risk to the individual would remain static and could potentially increase.

“It would not under any rational analysis decrease.

“These are not soldiers who have returned, these are individuals who live in this jurisdiction and the court knows that.”

The investigation into the controversial shooting has been beset by controversy and delay.

In 2014, the Jordan family were awarded compensation for the lengthy hold-ups in concluding an inquest.

An original inquest was adjourned in 1995 after being only part heard. Another probe was held in 2012 but the jury failed to reach consensus on a number of crucial issues, including whether the RUC used reasonable force.

Those findings were later quashed after the High Court identified a number of failings in how the probe was run.

On Monday, Justice Horner said it was impossible to determine with certainty what happened.

Adjourning the matter for further legal argument on November 21, Justice Horner said any ruling could have “wide ranging consequences”.