Autistic teen who made bomb calls to US spared jail 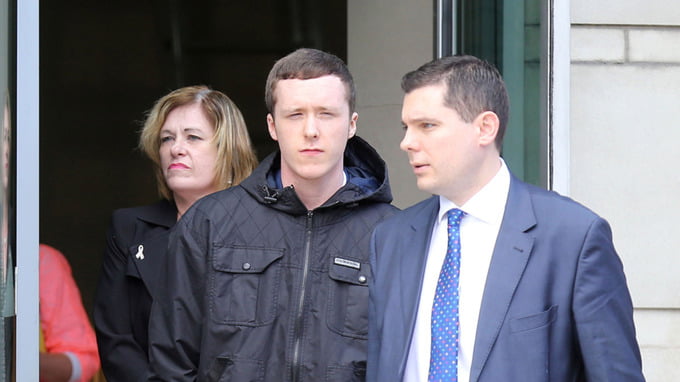 An autistic student, whose schoolboy bomb hoaxes and murder threats caused mayhem and distress across America, at a cost of tens of thousands of dollars has been freed on two years’ probation.

Belfast Crown Court Judge Sandra Crawford told a now 19-year-old Ben Megarry that his crimes would normally require deterrent and lengthy custodial sentences, but there were a number of mitigating factors in his case, including his age at the time, 15 and the connection between his offending and his undiagnosed Asperger’s syndrome.

Judge Crawford, who also ordered Megarry to completed 70 hours community services, said given these mitigation factors, including a number of expert reports, she was prepared to accept this recommendations of the pre-sentence report which found there was a low likelihood of his re-offending and that he did not present a danger of serious harm to the public.

In all Megarry from Harmin Park in Newtownabbey, Co Antrim, pleaded guilty to a total of 23 charges in which he made a spate of hoax calls between March and September 2012 to numerous “schools, businesses, public gathering places and airports within the continental United States”.

In June the court heard that among his targets as a teenage schoolboy, was Columbine High School – the scene of a “tragic and infamous gun massacre”.

Prosecutor Peter Magill revealed that Megarry phoned Columbine on the 13th anniversary of the April 1999 shooting, telling the school principal he was not only “going to finish” what the two killers had started, but “he would not be so lucky…and that he was going to die”.

Judge Crawford said it “was a sad irony” that many of the schools targeted by Megarry, had pupils who were disabled or diagnosed with special needs.

The judge added that while a top psychiatric expert reported that but for Megarry’s autism and Asperger’s syndrome, his offending may not have occurred, she found this difficult to accept as there were “too many imponderables” to definitively say he would not have committed the crimes.

In particular, said Judge Crawford, were Megarry’s “social naivety, desire to impress acquaintances, susceptibility to suggestion from others, his risk taking and thrill seeking behaviour, his inability of separating fact from fiction” and a lack of empathy or understanding as to the consequences of his actions.

As one expert put it, Megarry had been operating inside a “closed bubble”.

Judge Crawford also commented that while the seriousness of the charges faced by Megarry could not be underestimated, other mitigating factors included the time in bringing his case to trial, his clear record, and although his condition limited it, he had made expressions of remorse.

When questioned by police, Megarry, she added, had readily confessed, and he had also pleaded guilty, allowing him maximum credit for saving court time and the public purse a long and complicated trial.