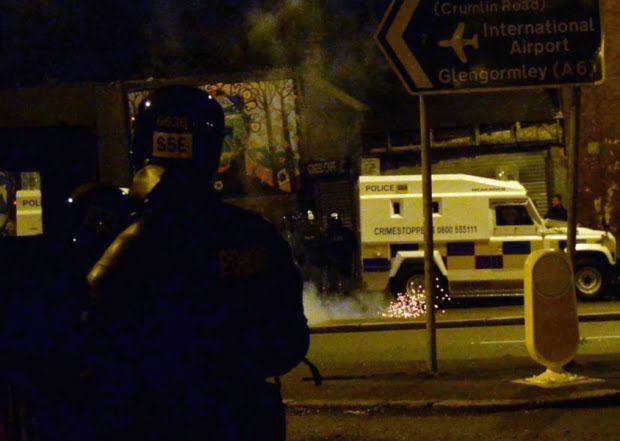 A Belfast man who was identified as a rioter by tattoos on his lower arm which bore his name and date of birth was sent to jail on Tuesday.

Ryan Samuel Elwood admitted taking part in a riot which broke out in the Woodvale Road area of north Belfast on July 13 last year after consuming a mixture of cannabis, vodka and Buckfast.

He was handed a 20-month sentence by Judge Sandra Crawford, who told the 25-year-old that he will serve half the term in prison with the remaining 10 months spent on supervised licence upon his release.

Trouble flared in the flashpoint area following a Parades Commission determination not to allow an Orange parade to go past the nationalist Ardoyne shop fronts.

Elwood – whose girlfriend is from Ardoyne – was so embarrassed by his behaviour on the evening in quesion that he hung his head when CCTV footage of his actions was played at Belfast Crown Court.

The footage showed Elwood throwing around four items at police lines, including a long wooden post.

From Berlin Street, Elwood was in the area for around an hour.

A Crown prosecutor said that when the CCTV footage was viewed following the riot, Elwood can be identified both facially and from tattoos on his lower arm of his name and date of birth.

He also came to police attention when officers trawled Facebook.

A month later, Elwood was arrested and during police interviews he admitted he had taken part in the riot.

The prosecutor said Elwood was “extremely remorseful and upset” and “didn’t wish to view all of the footage because he was embarrassed by his behaviour”.

This was also the case when the footage was played in court.

Defence solicitor Paul McCann from Madden and Finucane spoke of Elwood’s involvement in cross-community work and revealed that it was “somewhat ironic that his partner is from the area behind the police lines”.

Saying that Elwood knows he got himself involved in the street disorder when he knew he shouldn’t have, Mr McCann spoke of his client’s demons – namely cannabis and alcohol – but said he was a family-orientated man who has worked as a cleaner since leaving school.

The judge also said that Elwood told probation he “didn’t have an anti-authority attitude” and was “not sectarian” as he had a partner from Ardoyne.

Sending Elwood to jail, the judge said that “any form of riotous behaviour is to be deplored”.