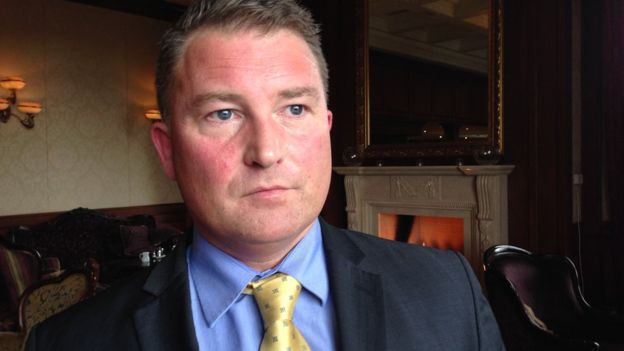 Ciaran Shiels, solicitor for the Donaldson family, said they had effectively walked out of the inquest process

The family of ex-Sinn Féin official and informer Denis Donaldson have begun new legal action after his inquest was adjourned for the 19th time.

The family said the action was directed against officials in the Republic of Ireland over the ongoing delay.

Denis Donaldson was shot dead in 2006, in a killing claimed by the dissident republican Real IRA.

His death came months after he was exposed as an agent who had worked for police and MI5 for 20 years.

Ciaran Shiels, the Donaldson family’s solicitor, said the legal action in the Republic has been taken against the

He added that the family would not return to the inquest until the issue was resolved in the High Court in Dublin and that they had effectively walked out of the process.

Members of the family expressed their frustration with the lack of progress in the case after the inquest was adjourned on Wednesday in Letterkenny, County Donegal.

In a letter, sent to those state bodies and individuals at the end of March, the family said 18 adjournments had been requested because of “an ongoing investigation” by the gardaí (Irish police).

“However, no meaningful investigation seems to have taken place by the gardaí and certainly there has been no criminal proceedings arising,” it added.

“Although the applicant acknowledges that some measure of a delay in the hearing of an inquest might be anticipated in a case such as this, there comes a point where that delay becomes unlawful and intolerable for those affected by the death.

“We submit that this threshold has been reached and that the inordinate and inexcusable delay in this matter is unprecedented in the history of the state.”

Earlier, the coroner agreed to a request by Irish police for a four-month adjournment so it could pursue the investigation.

A Garda superintendent said they had no intention to delay or inhibit the inquest but that police must be allowed to gather all the evidence.

Counsel for Mr Donaldson’s family opposed the adjournment and said they had “the greatest of misgivings about the bona fides of another application”.

Granting the adjournment, the coroner said he believed there was momentum in the case and also said he would like to see better liaisons between the gardaí and the Donaldson family.

The family have previously raised their concerns about the case, including an accusation that the gardaí failed to properly investigate his killing and that Police Service of Northern Ireland (PSNI) officers may have contributed to his death.

They have also alleged that handlers in the PSNI may have been responsible for exposing his role as an informer.

They claim that Irish police had breached Article Two of the European Convention on Human Rights, which says there should be fully independent investigations of killings by the state.

The family have also said that repeated Garda requests for more time have denied them their legal right to have an inquest into the death.