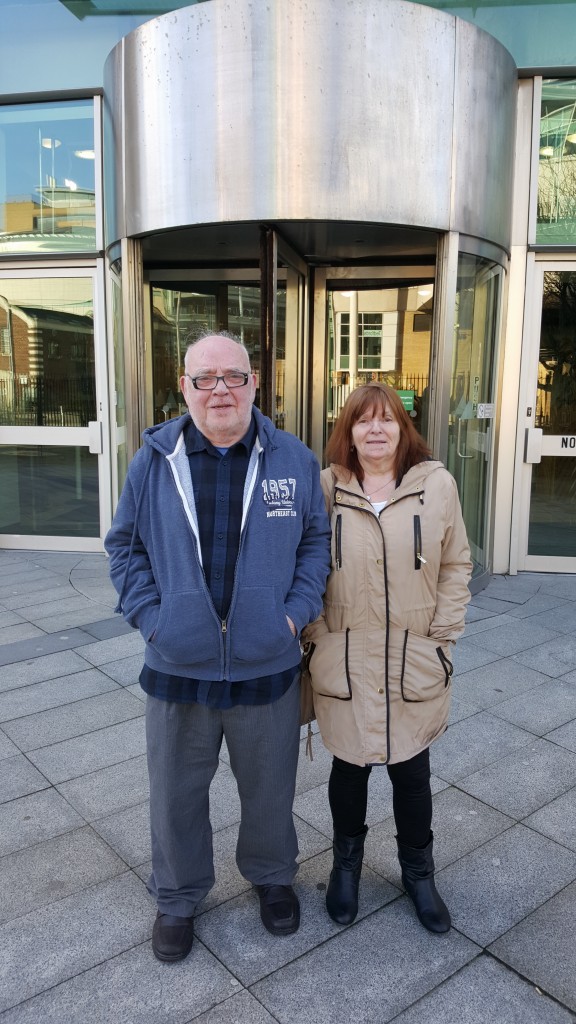 Blog by RFJ Casework Manager Mike Ritchie on the second day of the inquest into the killing of Pearse Jordan.

Here’s a picture of Hugh and Teresa Jordan outside the court following the second day of the inquest into their son Pearse’s death at the hands of the RUC Special Branch unit, the HQ Mobile Support Unit. Pearse was 23 when shot dead on the Falls Road on 25th November 1992. His parents have fought a magnificent and heroic battle down the years to seek for the truth about the circumstances of their son’s death. Many, many dozens of court hearings have been fought in the face of police and official resistance; they deserve considerable credit for achieving much greater scrutiny of state actions because of their determination and persistence.

Today the senior officer in the operations room on the day Pearse was killed gave his evidence. It turns out that this officer – as well as a number of the officers out on patrol – were involved in the shoot-to-kill incidents from 1982 subsequently investigated by John Stalker and Colin Sampson. Specifically he was one of the officers who opened fire at the hayshed where Michael Tighe was killed and Martin McCauley was injured. He was also one of the number of officers who told lies on the orders of superior officers after the incident. True to form, this man was rather sullen and passive/aggressive in his testimony, failing to remember when it suited him and refusing to acknowledge inconsistencies apparent to most reasonable observers.

This was the man who convened the debrief of all his personnel after Pearse was shot and allowed the shooter (Sergeant A) to outline his account of the shooting along with his explanation. As during the shoot-to-kill incidents, falsification of stories and co-ordinated accounts along with apparent failure to provide documentation which might contradict agreed lines seemed to emerge from his testimony.

It was heartening to see Pearse’s parents positioned so they could see this officer and judge his bearing and demeanour. Justice Horner, the High Court judge who is hearing the case without a jury, had ordered that the victim’s parents should not be denied sight of the RUC witnesses, who are these days screened from the public. This was a first for such a case and adds an element of natural justice usually sadly lacking when agents of the state are on the witness stand in this jurisdiction.

Tomorrow, three of the HMSU officers in the two cars which chased Pearse Jordan before he was killed will give their testimony.