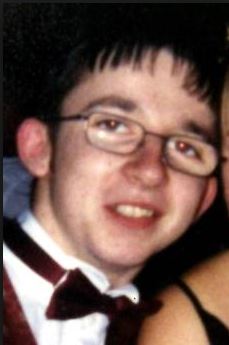 20-year old Daniel McColgan was shot dead by the UDA in January 2002 as he arrived at his place of employment, a Royal Mail postal sorting office in the Rathcoole area on the outskirts of north Belfast.

Relatives for Justice (RFJ) provided emotional and practical support to Daniel’s mother, Marie, in the period after his murder. Marie made a square in the RFJ Remembering Quilt and attended the offices for peer activities and other support. Clara Reilly and Mark Thompson also assisted Marie’s in her bid to ensure that justice was achieved. Sadly Marie became ill and passed away.

Yesterday it was disclosed that one of two weapons used to murder Daniel, a 9mm browning type pistol, had been used in a number of shootings including UDA punishment attacks and sectarian attacks from the period 1997 and 2003. It was revealed that of the 13 spent bullet cartridges recovered from the murder scene 7 went missing. Lawyers for the families said the loss was ‘alarming’. A lawyer for the PSNI said that the missing bullets ‘provided no clues’. However, the lawyer was unable to say whether or not they were retested in 2007 when the case was reviewed. A second gun, a 9mm Beretta pistol had previously been stolen.

It is worth noting that two public interest immunity certificates (PIIC) were granted to the PSNI and MoD in the case and that disclosures are heavily redacted.

Intelligence disclosed revealed that Daniel had most likely been set up by work colleagues within the sorting office and that one of two cameras that should have been working was switched off. This, it was said, was likely by an insider assisting the killers. Some staff at the office had requested that cameras be installed. Objections appear to have been raised by other staff and union representatives in that cameras might affect the role of the security gate worker. Checks on employees appear to have been scant as part of the murder investigation.

Alarmingly after the murder a person/witness, Stephen McCullough, presented himself to police with information about the murder and yet despite his best efforts detectives did not speak him to. Within hours of leaving police McCullough was found dead at the bottom of Cavehill. Intelligence reports show that McCullough was part of a UDA punishment squad in Rathcoole and likely to have been involved in the murder. Retired detective Roy Suitters, who headed up the murder investigation team, said this was a ‘significant mistake’.

Under cross-examination on the second day of the inquest by legal counsel for the family, Andrew Moriarty (Madden & Finucane Solicitors are instructed, Fearghal Shields), Roy Suitters had a number of questions put to him concerning the stolen Beretta pistol.

He was firstly asked how he knew the make and serial number of this pistol. Mr. Suitters told the inquest that before a legally held personal protection firearms license is granted to an individual the weapon must be registered; that means it has it’s serial number recorded and is test fired and the ballistic report and bullet head are retained.

Counsel asked if the murder investigation team ran intelligence and other checks on the individual who registered the weapon to ascertain whether or not that person may have had any links to loyalist paramilitaries. He replied no, adding that the officers who investigated the robbery would have carried this out. When asked how this was conducted, including what intelligence this separate line of inquiry to the actual theft of the gun, threw up Mr. Suitters replied that it showed no links. However, he later conceded that he wasn’t absolutely sure that these checks were completed stating he just presumed they had been carried out.

Counsel revealed that the weapon had been used in an attack on a person/s in the Mosley area on the outskirts of north Belfast on March 2nd 2003.

Mr. Suitters was also asked whether or not he had any knowledge of the weapon being in the possession of an agent subsequent to the theft to which he replied no.

On the matter of forensics former Det. Suitters was asked about a fingerprint taken from the back number plate of the partially burnt out vehicle used by the killers; and low copy DNA samples from the door handles.

Mr. Suitters told the inquest that these produced no results. Under further questioning in relation to a separate exhibit submitted for DNA testing, a cigarette butt also recovered from the scene, he later conceded that he didn’t know if this had produced results.

Counsel then revealed that the forensic scientist, Dr. Clayton, had complained about the lack of detail on two exhibits and that as such he was unable to complete and compare samples on the DNA database.

The coroner noted that with scientific advances that these should be resubmitted for testing.

A further matter raised with Mr. Suitters was a police search of a flat in the Rathcoole area at which two postal worker uniforms were discovered in a cupboard and in the kitchen, which overlooked the scene of the murder, a pair of binoculars and a mobile phone (kept together). According to Mr. Suitters when police put to the occupier how the postal uniforms happened to be there he replied that they had been there when he moved in to the flat. Accounting for the items in the kitchen the reply was that he liked to ‘watch’. Mr. Suitters said the occupier was ‘cocky’.

Counsel referred to the occupier as a ‘suspect’ to which Mr. Suitters corrected him saying he wasn’t a suspect. Counsel then enquired how this was so given that a search was somehow prompted, and then items were found and that surely this person would have been a ‘suspect’. Mr. Suitters explained that he was a ‘potential suspect’, a ‘person of interest’, and that he was eliminated from police enquires after the search. Mr. Suitters said that there are three categories; (A) a potential suspect, (B) a suspect, (C) a previous suspect. This person was only ever seen as category A, a potential suspect. There was some disbelief that given what the search yielded and yet this person didn’t then move to becoming a suspect. It also emerged in the inquest that the same individual also had an association to known loyalists. Documents, despite being redacted and somewhat illegible, also showed that there was a decision not to prosecute this person; a decision taken by Mr. Suitters.

The same bundle, that has PIIC restrictions, contains pages that show there was a decision to show pictures of the main suspects to some witnesses but at the last minute there was instruction not to. Mr. Suitters explained that this would have jeopardized potential prosecutions. Again the coroner interjected raising objections as to relevance of the line of questioning.

There was some discussion and questioning as to a delay in viewing CCTV footage, in particular the cameras inside the postal sorting room. Again this focused on workers inside who may have tampered with cameras.