A Prisoner Ombudsman report has found a prisoner with an inoperable brain tumour could have had an extended life expectancy and reduced distress if opportunities to diagnose his condition earlier hadn’t been missed. 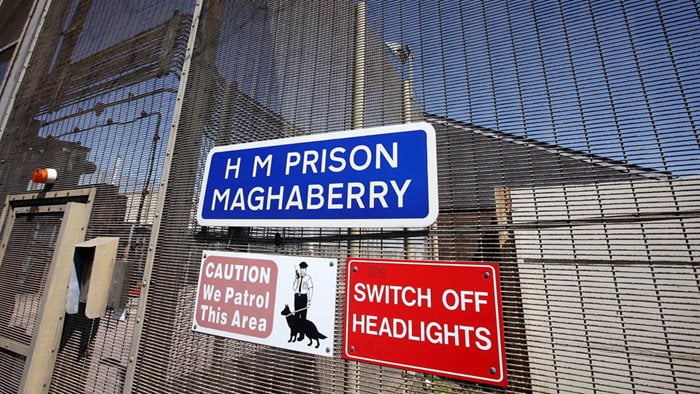 The man was a prisoner at Maghaberry Prison

The prisoner, known as Mr H, who died in September 2014, had been released from Maghaberry Prison in July of that year due to his illness.

According to the report, four opportunities to diagnose his tumour were missed and care plans were not initiated when he became dehydrated and malnourished.

The investigation did find that several prison officers and nurses showed compassion for Mr H while he was in prison and that he was not always compliant with the care that was offered.

The report also stated that it’s possible his attempts to manipulate the medication which was prescribed to him did not assist his diagnosis.

Treatment was also delayed when he did not attend a hospital A&E.

The clinical reviewer recognised that some of Mr H’s care was very good, in particular his mental health assessments.

In addition it was found that, although earlier diagnosis would not have changed the final outcome, opportunities for an extended life expectancy and a reduction in his distress through earlier palliative care could have been provided.

However, the investigation laid out other findings which it said were not in accordance with best medical practice.

They included a lack of urgency when Mr H presented with new neurological symptoms, poor sharing of information by healthcare staff who attended his review meetings, a lack of a co-ordinated follow-up after he not attend hospital, a lack of involvement by doctors during the July holiday period and poor recording.

The report makes fifteen recommendations for improvement, all of which have been accepted by the South Eastern Health and Social Care Trust (SEHSCT) and the Northern Ireland Prison Service (NIPS).

A gap in clinical leadership was noted at Maghaberry Prison, after one recommendation was previously made to, and accepted by the SEHSCT, in February 2012.

The SEHSCT accepted all of the recommendations of the report, stating they are committed to implementing improvements as a result of the lessons learned from all investigations.

The NIPS said it is determined to use this report to strengthen systems already in operation throughout Northern Ireland’s prisons.

Prisoner Ombudsman Tom McGonigle, in expressing sympathy to the next of kin, said: “This report again highlights the need for someone to actively take charge and manage the first line clinical care of patients in prison, where families are less able to assist or advocate on their behalf.

“The fact that we also published a report last week which raised virtually identical issues, reaffirms the need for the prison healthcare reform project to provide improved diagnoses and better palliative care for the terminally ill.”