Steps must now be taken to ensure warders can be singled out through their uniform within the next six months. 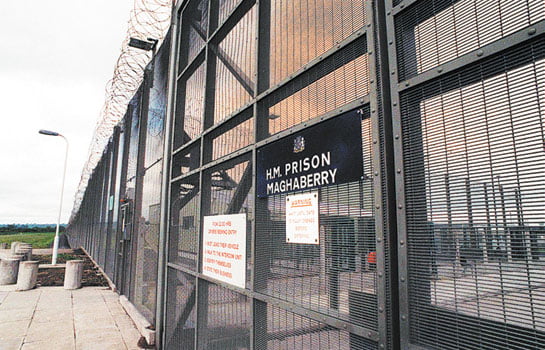 The outcome was reached in legal action by Christy O’Kane, a 42-year-old Derry man on remand at HMP Maghaberry on charges of IRA membership and taking part in mortar bomb attacks between 1992-94.

O’Kane, who is being held in the dissident republican Roe House wing, claims he was assaulted by members of the prison’s Standby and Search Team in February.

Tensions were running high in the jail at the time, with authorities at Maghaberry saying their staff had been threatened and intimidated.

O’Kane alleged he was kicked in the groin and subjected to verbal abuse by one of a group of officers dressed in dark boiler suits, black boots, helmets and carrying truncheons.

According to his case he passed blood for several days and was denied access to his solicitor or appropriate medical treatment.

Separate action is being taken against the Prison Service for personal injuries, loss and damage as a result of the assault.

O’Kane claimed the officer who allegedly assaulted him could not be picked out because he wore no form of identification, either a name or number.

He issued judicial review proceedings seeking a finding that the policy of not introducing a method of identifying staff was unlawful.

His lawyers argued that an agreement to ensure individual markings on uniforms featured in another ruling back in 2009.

In court today it was confirmed that O’Kane’s case was resolved with a formal declaration to be approved by the judge.

It stated that the Prison Service’s failure to implement adequate means for the identification of staff by their uniform was unlawful, based on the earlier agreement to do so.

He was granted an order compelling the Prison Service to implement sufficient means of identification of staff by their uniform by December 18.

With O’Kane’s legal costs also to be paid by the respondent, Mr Justice Treacy confirmed: “I will make an order in the terms of the draft provided.”

Outside court the prisoner’s lawyer explained his reasons for the litigation.

Ciaran Shiels of Madden & Finucane Solicitors said: “Mr O’Kane was unable to identify the particular prison officer who violently assaulted him because of the absence of any identification marks on his uniform and so felt compelled to bring this action to create some form of effective redress against prison officers who have been able to act towards republican prisoners in an aggressive or criminal manner with virtual impunity.

“The High Court has now formally declared that the prisoner’s rights had been violated and the effect of this legal action will ensure transparency and accountability in that prisoners can now have complaints investigated which are capable of leading to the identification and punishment of those officers responsible.”