“The PSNI yesterday morning at Spencer Road, Derry made an approach to a middle aged male requesting that he work for them as a paid informant to provide information on persons in the local community. The individual concerned acts as a community worker on a voluntary basis in the Creggan area.

“He also suffers from various health problems and is clearly vulnerable.

“After telling the officer, who identified himself as ‘Mark’, that he did not wish to become involved, police made a further approach to him by phone at 4pm. We are in possession of ‘Mark’s’ mobile number.

“We have written to the PSNI Area Commander Chief Inspector Tony Callaghan requiring him to provide an assurance that police will desist from this conduct immediately in relation to our client. We have pointed out that our client’s Article 2 and 8 Convention rights are being deliberately infringed and that we will issue civil proceedings against the Chief Constable without further notice. We have copied the correspondence to Dr Michael Maguire the Police Ombudsman. The Area Commander has until 16 January to fully respond.” 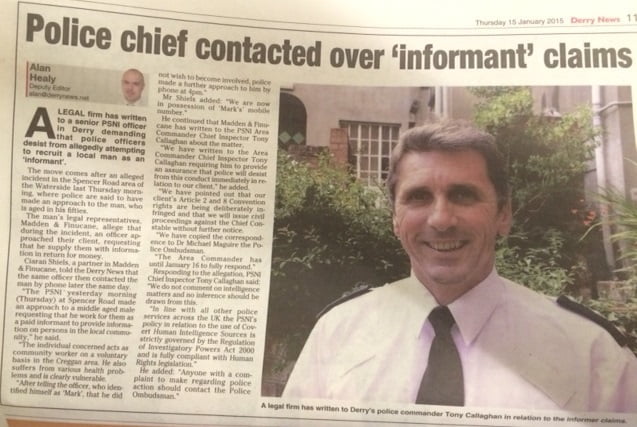